As I was watching Amy Comey Barret's hearings, my heart ached for what she and her family were being put through just because so many are for abortion. I knew as I watched it was time to revisit the topic of abortion. I have shared before that when I read the Bible through for the first time, Matthew 2:18 left me feeling unsettled. "A voice was heard in Ramah, weeping and loud lamentation, Rachel weeping for her children; she refused to be comforted, because they are no more." I also shared that I first associated this verse with Moses' time when Pharaoh ordered midwives to kill Jewish babies and with Christ's time when all boys under the age of two were to be put to death to make sure the "King" would not rise to power.

At the time I discovered these verses I was having my own babies and as I thought about those verses, I could not wrap my mind around the brutal orders given by those men that were responsible for the deaths of so many children. This was especially true as I stood over the baby-sized coffin weeping with my friend as she was burying her six-month-old baby, my heart ached for every child that has been lost and for every mama that has stood with empty arms and engorged breasts, weeping for a child she wanted with all of her heart, but had to lay to rest. It hurt my heart to know those mamas would never hear their babies cry again. Never hear them laugh cute belly laughs. Never hear them call for her after bad dreams. Never hear them sing or watch them dance. Never watch them play tag, catch balls. Never celebrate those milestones that we often take for granted--first steps, birthdays, graduations, holidays, and marriages, and grandchildren. I couldn't help but believe as my friend's baby was laid to rest that Rachel could be heard weeping with all grieving Mamas. 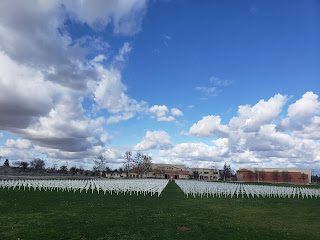 As I look at all of those crosses I can hear Rachel weeping for the children, can you?
As I sat by the incubator of our granddaughter born at 26 1/2 weeks, I prayed for her as I observed how perfectly she was formed. She had a head full of golden curly hair, was super active, fought hard for her life, and showed her spunky little personality when she would be woken up from a sound sleep for tests. I knew I was given a glimpses of life as it is in the womb and wondered how anyone could terminate it.
I do know children of church going people have been sacrificed as well. It has occurred when abuse has not been reported, but was covered up to protect the abusers and churches' reputations. It has occurred when church going women and teens get abortions to cover shame they feel over pregnancies conceived outside of marriage or when it feels overwhelming. Sadly, terminating lives doesn't solve sin or shame issues. In fact it increases guilt, shame, depression, anxiety, and regret, causing grief over a life time. Thankfully, churches in our area provide are providing safe groups in which women can confess to one another their sinful choices. They can come out of hiding and collectively grieve openly the babies they terminated, and experience grace that is bigger than the shameful choices made. I am sure every year in those groups Rachel can be heard weeping along with the ladies who have the courage to attend.
The psalmist wrote, "For you formed my inward parts, you knitted me in my mothers womb. I praise you for I am fearfully and wonderfully made...In your book were written, every one of them, the days that were formed for me, when as yet there were none of them." We must understand our God is the giver of life and not equate choice with terminating life. God at times revealed his plans for people's children before they were born. Samson's parents were told. Mary was told about Jesus role. John the Baptist's parents were told and amazingly, John recognized the Messiah Mary was carrying in her womb while in his own mama's womb. I believe he leapt for joy when Mary approached.
Sarah Purcel, who was on TV when I was young shared in an interview that she gave the birth mom of her adopted child a tape of her singing songs to play against her belly. The birth mom complied and played those songs daily. When Sarah sang those songs aloud in the delivery room, the baby quit crying and looked around for the one whose voice was familiar. Babies in the womb are not clumps of tissue growing. They are humans fashioned by the living God. I long for the day that Jesus reigns in perfect love and righteousness and stops the death of children. I also long for the day that He will he wipe away every tear every "Rachel" has wept.
Posted by Wendy